For many years, the former car lot in the 1300 block of Ninth Street has cried out for new life. It sits in an area that has seen so much renewal: Immediately adjacent to it is a long-vacant building that's about to receive a huge renovation to house offices and the show room of noted designer Darryl Carter; a few doors away are notable neighborhood businesses EFN Lounge, Azi's Cafe, Maruka Yoga and Boutique; across the street is the new headquarters to Independence Bank and a handful of fully occupied, market rate apartments; and so on and so forth. I've secretly dreamt that the lot would be utilized as a weekly flea or farmers' market. 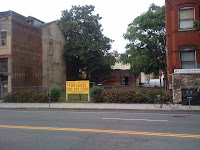 I recently heard that the lot has been leased to someone planning to use it as a twenty four hour a day, seven day a week valet lot -- a place where valeted cars will be parked while their owners dine or drink nearby. I certainly see the value in such a lot, given the parking constraints around the convention center. There are two controversial aspects of the plan, however:

First, the lessee has supposedly expressed a desire to get a curb on Ninth Street for easier access. I believe that ANC2F must be given the chance to weigh in on any new curb cut applications, and I am not aware of the ANC having yet had a chance to consider the issue. Without the curb cut, Naylor Court will be negatively impacted by increased traffic in the alley. On the other hand, the curb cut eliminates valuable, publicly available street parking. 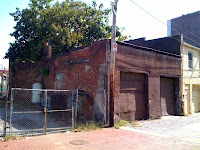 Second, the lessee has supposedly expressed an interest in demolishing the old Abate building to maximize the number of spaces available for surface parking. I have heard that the current plan is to keep the structure for now, and possibly to stabilize it for the short-term. Neighbors and those who value alley dwellings and their unique contributions to the character and authenticity of our city and of unique places like Naylor Court are understandably concerned. For now, however, it sounds like the structure is safe.

It will be interesting to see how this plays out. What do you think of the plan for a valet lot? A curb cut? Razing the old Abate building?
Posted by Shaw Rez at 8:31 AM

I am very sick of parking lots. they are cheap, crappy, ugly and very lucrative. ANC 6C is discussing a proposal to put a time limit on parking lots tonight amongst other things. Should be an interesting discussion.

I am also against tearing down that alley building. there are not many left, they are not that complicated and therefore should not be that expensive to preserve.

Looked up the zoning for this lot and it is currently C-2-A. So as a matter of right under regulation 701.6 section H they are allowed to establish a parking lot here. There are regulations which I included below on allowed parking lots.

The only thing the community has the right to weigh in on is the curb cut issue. Personally I would be against the curb cut on 9th street as that makes the parking lot most likely a long range(10+ years) reality as opposed to short term use. As indicated earlier this will have a impact on the Naylor court side... but that is what the community is going to have to decide. As far as I know the ANC does have the right to weigh in on any curb cuts.

2303.1 A parking lot in any district shall conform to the following provisions:

(a) All areas devoted to driveways, access lanes, and parking areas shall be surfaced and maintained with an all-weather surface. In addition to traditional impervious surfaces, allowable all weather surfaces include porous (or pervious) concrete, porous asphalt, and/or mechanically-reinforced_grass, excluding grass or gravel.

(b) The parking lot shall be designed so that no vehicle or any part of a vehicle projects over any lot line or building line;

(c) No other use shall be conducted from or upon the premises, and no structure other than an attendant's shelter shall be erected or used upon the premises unless the use or structure is otherwise permitted in the district in which the parking lot is located;

(d) No vehicular entrance or exit shall be within forty feet (40 ft.) of a street intersection as measured from the intersection of the curb lines extended;

(e) Any lighting used to illuminate a parking lot or its accessory buildings shall be arranged so that all direct rays of the lighting are confined to the surface of the parking lot; and

(f) The parking lot shall be kept free of refuse and debris and shall be landscaped. Landscaping shall be maintained in a healthy growing condition and in a neat and orderly appearance. Landscaping with trees and shrubs shall cover a minimum of five percent (5%) of the total area of the parking lot, or an area as determined by the Board of Zoning Adjustment for a parking lot otherwise requiring Board approval.

I hate this plan. Something similar was proposed along H Street.

Part of the impetus for getting rid of the shady car lots (which this was one) was to improve the look of the neighborhood. Putting cars back on this lot will just make it what it was - a dingy car lot.

if this lease and this lot's fate is a done deal, i propose we deal with it via the following:

a) oppose ANY curb cut on 9th st. we CANNOT loose the valuable street spaces in the heart of our commercial district!

c) work with the lessee to allow for patrons to the area to self-park for a reasonable rate.

e) work w/ the lessee to provide nice, historic-district-appropriate lighting in the lot.

Taking a look from the OTHER front side of this lot: Naylor Court is a residential alley -- not just "kinda" residential, but the edge of a zoned R-4 district with historical value. So having any entrance to the lot through the alley is a non-starter. I hope the ANC and BZA realize that from the get-go.

And let's not gloss over the "protected by federal law" coverages of the Abate building. Naylor Court has already suffered one extremely notable failure to protect an historic building in the last year. If any plan is to be considered for that lot, the lessee and/or owner should provide a stabilization and restoration plan for the building -- so that the historic neighborhood doesn't hear "yes, yes, we'll do something," and then find that that something is to knock the building down in a "construction accident."

Beyond the issues with residential and historic zones, another surface parking lot is just lame -- it's not contributing to the growth and character of the neighborhood. And if it's a "valeted" lot it doesn't even get new people into our neighborhood to see what's here: It's just their cars and the same valet parkers, over and over.

What does Darryl Carter think? Does he want to work with the neighborhood to put in a pocket park, or find an appropriate neighbor tenant?

Ugh, a parking lot? I love the idea of a community garden or farmers market (though Mt. Vernon just got one), or a clean open green space would be nice. As for the abate bldg, if its federally protected, is there some way to clean it up? It's an eye sore on the 9th street side declaring "Pear(something)"

curb cut on ninth is much worse than the bad affects on the alley.

has a lease already been signed?

Of course I would prefer there to be some retail infill on this site but I'd also like O Street market to break ground this year and for the other empty store fronts to attract new businesses.

A parking lot may not be ideal but the community does have a say in how it is operated. Maybe we could lobby the operator to put an attractive dividing wall so it is not such an eyesore on the street.
http://www.google.com/imgres?imgurl=http://www.trendir.com/outdoors/modern-wooden-fence.jpg&imgrefurl=http://www.trendir.com/outdoors/the-allure-of-the-modern-fence.html&h=346&w=520&sz=78&tbnid=sT5mCSmPG0fk_M:&tbnh=87&tbnw=131&prev=/images%3Fq%3Dmodern%2Bfences&usg=__HQDTifoCfKBdGWKg-lc8aFrECTo=&ei=--_NSq7nBY-N8AbGnpntAw&sa=X&oi=image_result&resnum=1&ct=image

Naylor Court is on the National Register of Landmark Properties (since 1990) and is federally protected. That means EVERY SINGLE ADDRESS in the alley. So far there have not been presentations to the community or the alphabet list of boards (DCRA,DDOT,BZA,ANC,HPO,HPRB etc) about a parking lot. The lease may have been signed but the owner of the property is ultimately responsible. It seems that in the past a large sum was turned down for this property when it was for sale in the anticipation of even more money. Now that the market has changed ... The community should not be forced to pay for an individual's personal property management problems.
Speed bumps in the alley will be strongly opposed by the community since they are counter to the historic feel of this collection of buildings. Better to eliminate the need for them in the first place. One way traffic flow will solve some of the problem quickly.
There are ALREADY two huge parking lots in Naylor Court on land where historic homes once lived.

we are trying to make a better city, not a better suburban environment. this is an example of where i think the perfect is not an enemy of the good!

Want to know what I'm doing or observing in the neighborhood? Follow me!

Too busy to pick up a copy of MCDC to read my monthly Shaw Streets column? Read it in PDF here online!