View Developments in Shaw in a larger map

CityMarket at O - located within the blocks bounded by Seventh, Ninth, O, and P Streets, NW, this catalytic project will include 1 million-square foot urban infill project that will include over 87,000 square feet of retail, 600+ residential units, a 200 room hotel, and over 500 parking spaces. The project will revitalize the historic O Street Market, which was constructed in 1881, by restoring it and incorporating it in to a new 71,000-square foot Giant Food Store. The new store will combine the charm of the 19th Century with 21st Century efficiency to create one of Washington's largest food stores and the East Coast's most unique and interesting shopping experiences.  Construction commenced officially in November 2011.  The new Giant will open by November 2013, followed quickly by the apartments and hotel and soon thereafter followed by the condominiums and senior housing.
625 Rhode Island Avenue NW – located on Rhode Island Avenue between Sixth and Seventh Streets, this is a project designed by Suzane Reatig Architecture that will be developed by The United House of Prayer for All People. It will be a 32,125 square foot multi-family building comprised of 16 units, eight of which will be affordable to households earning 60 to 80 percent of the AMI, with a mix of two and three-bedroom units, ranging from 1,150 to 2,200 square feet. Additionally, there will be 11 surface level parking spaces, open green space at ground level, a green roof, small rooftop deck, and developers will shoot for LEED certification. Construction should start in early 2011.


CityCenter DC - Located on the old convention site, CityCenter DC is a 2.5 million sq. ft. mixed-use development on a 10-acre site in the heart of downtown Washington, DC, that will be built in three phases.  The groundbreaking occurred on April 4, 2011.  This project will certainly affect the Shaw area, as it will better link the neighborhood with downtown and provide many new residents and exciting retail options nearby.

Convention Center Hotel - located in the block bounded by Massachusetts Avenue, Ninth and L Streets, NW, this catalytic development will be a four-star, 1,167 room, Marriott Marquis hotel -- one of only three such properties in the country. The $537 million project will fuse the world-class services and amenities of the Walter E. Washington Convention Center with the urban sophistication of a four-star Marriott hotel. Street level retail and restaurants will energize Ninth Street. Construction began in November 2010.

Progression Place - located at Seventh and S Streets, NW (next to the Shaw Howard Metro Station), this mixed use development will have 100,000 square feet of office space (which will be anchored by the headquarters of the United Negro College Fund), 224 apartments, and wrap-around ground level retail, and 188 below-grade parking spaces. The development plans call for a face-lift for 7th Street retail frontages. Construction began in November 2010 and delivery is expected in the fourth quarter of 2012.

﻿﻿Howard Theatre - located in the 600 block of Seventh Street, NW, this historic project will involve the restoration, revitalization and expansion of this landmark theater in Shaw. The project will bring back the building’s original façade, crowned with a statue of Apollo (the Greek eminence of arts, music and poetry). The interior combines flexible main-floor arrangements – 650-700 seated or 900 - 1,000 standing - with balcony seating to support a wide variety of events. The new configuration, with its state-of-the-art acoustics, video and recording capabilities, will allow The Howard to retain the intimate feel of its former 1,200-seat space, while appealing to both traditional and digital-age audiences. A deeper stage, basement and additional wing space will provide for enhanced set preparation, gourmet kitchen and administrative office space. The plaza in front of the theater will be graced by a stainless steel rendering of Duke Ellington and his piano, the keys of which will swoosh upwards into a clef standing 20 feet high. Construction began in August 2010. 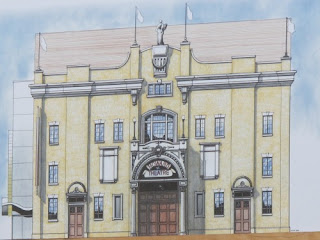 1501 Ninth Street - located at the intersection of Ninth and P Streets, NW, this highly visible corner project will be a four story mixed use development with ground floor commercial and residential above. The development is 100 percent pre-sold. Mandalay Burmese Restaurant will occupy the commercial space. Construction started in January 2011. 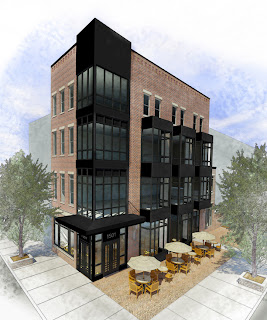 751 P Street NW -  located at Seventh and P Streets, NW (formerly part of the Kelsey Gardens assemblage), 751 P Street will consist of twelve new construction 2 BR / 2-2.5 BA boutique condominiums. This new construction building is designed to look like a row of six townhomes that blend in well to the historic Shaw neighborhood.  Capital City Real Estate is the developer.  Construction should start in the first quarter of 2012.

1250 Ninth Street - Developer CAS Riegler is seeking approval for its plans to transform 1250 Ninth Street (former home to Fight Club) and the lot at Ninth and N currently occupied by Old City Green into a mixed use project. The development would include ground floor retail and fifty four residences. 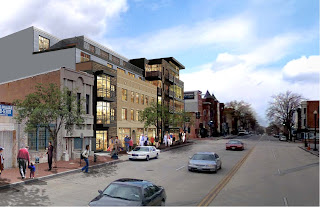 Jefferson at Market Place - located in the 1500 block of Seventh Street, NW, this project will redevelop the former Kelsey Gardens apartment complex.  The plan includes an eight story, mixed-use development of 278 rental units and 14,000 square feet of retail, and twelve townhouses. Jefferson Apartment Group is the developer.  Construction should commence in the first quarter of 2012.

Lincoln Westmoreland Expansion - located at 1710 7th Street, NW at the northwest corner of Seventh and R Streets, NW, Lincoln Westmoreland Housing Inc. plans an eight story, fifty unit apartment complex next to its existing ten story building that fronts the 1700 block of Seventh.   The new building is designed by Shalom Baranes architects and will replace a decked-over parking lot, have retail on the ground floor, and still leave some green space for a sculpture installation.  The units will likely be priced to be affordable for people making 60 percent of the area median income.  Construction could start in Fall 2011 with a delivery of fall 2012. 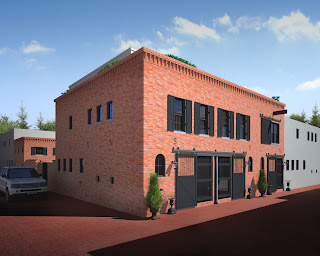 Parcel 42 - located at Seventh Street and Rhode Island Avenue, NW, Parcel is likely to be developed as a mixed-use development of some sort, however funding and current project scope are unknown.

Wonderbread Factory - located in the 600 block of S Street near the Progression Place and Howard Theatre developments discussed above, Douglas Development plans to redevelop the currently vacant Wonderbread Factory into offices and retail.   The developer intends to restore the facade to its original 1922 appearance, add an additional story.  R2L: Architects are designing the project.   Construction should commence in the first quarter of 2012.

JBG’s Florida Avenue Parcels - located on the south side of Florida Avenue between Seventh and Ninth Streets, NW, JBG purchased the parcels from WMATA in July 2011.  JBG has engaged noted architecture firm Miller Hull to design the project.  Ground floor retail several stories of apartments above is likely in store for the two parcels.  Groundbreaking could take place by 2013 with an anticipated 22 months of construction.


Completed Since Creation of ReNewShaw.Com

623 M Street - located on the same block as its developer, United House of Prayer, 623 M Street is a three story, nine unit apartment building. The top three units have 2-story living spaces, small "loft" areas and private outdoor terraces. The building sits lower on the site than the former structure that occupied the site, so it is more approachable and relates better to the street. It has a generous entry porch with built-in waiting benches. Its exterior finishes, which include colorful metal panels, make a subtle nod to the adjacent church building. The new building delivered in fall 2011.

The Nth - located on a formerly vacant lot at 907 N Street, this project consists of a new, three story plus basement, brick, four unit condominium structure. Construction was completed in January 2011.

Watha T. Daniel/Shaw Neighborhood Library - located the the triangular plot bounded by Rhode Island Avenue, Seventh, Eighth and R Streets, this gorgeous new library replaced an uninviting and bunker-like 1970’s era library on the same site. The bright and beautiful new three-level building is approximately 22,000 square feet and features a flexible design to provide inviting spaces for all. Its features include: separate reading areas for adults, teens and children; a children’s program room; a 40,000 books, DVDs, CDs and other library materials and a capacity for 80,000 items in all; thirty two public access computers with free Wi-Fi Internet access; eight Mac computers in the teen space; comfortable seating for 200 customers; a large program room for up to 100 people; two twelve person conference rooms; and a vending area. The new library was designed by the architecture firm of Davis Brody Bond Aedas. A signature light sculpture by local artist, Craig Kraft, adorns the public space outside the library’s front entrance. The new library opened in August 2010. 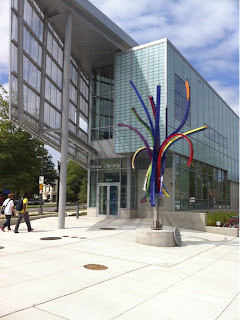 The Nine - located in the 1300 block of Ninth Street, NW, The Nine is a historic mixed use redevelopment featuring four residential, one office and one retail condominiums. Community Three Development developed The Nine. The residences each possess great finishes, airy and open rooms, and outdoor spaces. Two units are accessed from a cute entrance on Naylor Court and two are accessed from Ninth Street. The Nine delivered in 2009.

1553-1555 Ninth - located at the corner of Ninth and Q Streets, NW, this four unit, Christian Zapatka designed project delivered in 2009. 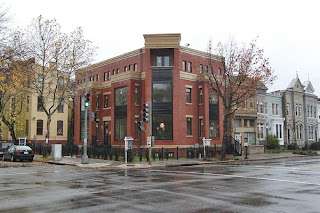 The Providence - located in the 1500 block of Eleventh Street, NW, The Providence is a historic redevelopment and new construction featuring ten condominium units. It delivered in 2008.

The Exchange - located at 1301-1309 9th Street, The Exchange is a mixed-use (commercial/residential) development by Douglas Development Corporation. The project incorporated the facades of some of Shaw’s oldest buildings. This project features twenty five residential units and 6,815 square feet of retail space. Independence Bank located its headquarters in the commercial space of the Exchange in 2009. The Exchange delivered in 2008.

The Monique - located at 5th and R Streets, The Monique is a twelve unit condominium building offering high end finishes with one and two bedroom flats and two-level, two bedroom penthouses. It delivered in 2007.

The Whitman - located at 910 M Street, NW, this twelve story, 185 unit condominium building was developed by Faison. It features unique and beautiful architecture, high end finishes, a rooftop pool, an onsite gym, a concierge, and many other amenities. The Whitman delivered in 2007.

Good stuff, thanks -- we're looking at homes in Shaw (and elsewhere, like Columbia Hts/Petworth) and it's great to see some of the improvements already in-place and the others coming soon.

Want to know what I'm doing or observing in the neighborhood? Follow me!

Too busy to pick up a copy of MCDC to read my monthly Shaw Streets column? Read it in PDF here online!